Award Given for ‘Optimal US Coast Guard Boat Allocations with Sharing’

The Institute of I

This paper represented a unique partnership of university and US Coast Guard researchers and authors. CCICADA Post-doctoral Associates Brian Nakamura, PhD, and Christie Nelson, PhD (CCICADA-Rutgers University), accepted this prestigious award on behalf of the research team and paper co-authors.

The CCICADA data-driven, decision-support project that is at the core of the paper’s research is the USCG Boat Allocation Module Phase II or BAM II. Representing a unique researcher-homeland security practitioner partnership, the BAM II project’s resource-optimization model gives the USCG the opportunity to explore shared boat assignment scenarios across USCG stations. The goal of the project was either to minimize costs or minimize the number of boat assignments.

The concept of sharing boat assets grew from the first phase of the BAM project. BAM modelling focused on whole-boat solutions in the optimal assignment of boats to stations. Although this led to potential significant improvements in boat allocations and associated cost savings (USCG estimated 20 year savings of up to $120 million), fractional solutions to the model proved to hold promise for even greater efficiencies. Fractional boats in the context of USCG operations means shared boats. In other words, a boat asset could be used for a specified time period at one station to satisfy mission needs there, then moved or shared with another station (within a reasonable proximity/within district) to meet its mission requirements.

For example, suppose Station A needs 2.5 boats to meets its responsibilities and Station B needs 1.5 boats.   In the whole-boat case, Station A would be assigned 3 boats and Station B would have 2 boats for a total of 5 boats. A sharing model could allow for the assignment of 1 less boat with shared mission efforts between the 2 stations.

Again, the success of the project and subsequent recognition of its research merits and operational contributions through the ISERC Best Paper Award could only have occurred through close collaboration between CCICADA and the USCG. This partnership is necessary to accurately build a feasible and usable model in support of the USCG’s homeland security priorities. 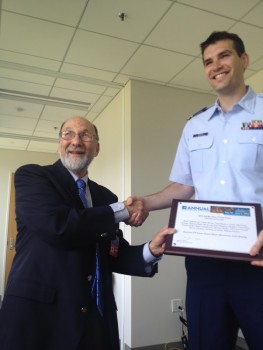 In addition to appearing in the Honors and Awards program at the 2015 conference, the award will be published in Industrial Engineer magazine and posted on the Honors & Awards page of the IIE web site.

CCICADA stands for the Command, Control and Interoperability Center for Advanced Data Analysis, a consortium of 17 universities and businesses that conducts homeland security research, with real-world applications, for agencies of the US Department of Homeland Security and other groups.