CCICADA Researchers Use Complex Algorithms to Analyze Millions of Variables

By Rebekah A. Mullaney

The Alaskan Arctic includes an immense 1,200-mile waterway of strategic importance to the United States. Cold, pristine, and beautiful, the area presents a complex challenge for the US Coast Guard.

The sparse infrastructure, unpredictable weather and environmental conditions, and remote location of the Arctic make it difficult to plan ahead for oil-spill responses, search-and-rescue operations, and other critical Coast Guard missions. Moving people, materials, and equipment great distances in a dynamic area with little commercial, maritime or safety infrastructure presents a formidable logistics problem.

Fast-melting polar ice along the Arctic’s Northern Sea Route, a result of global warming, has magnified this challenge. As the Arctic seas have become more navigable in the warmer weather, there has been a tremendous pickup of activity in commercial shipping, in plans for expanded offshore oil-drilling, and in adventure tourism on small cruise ships. Some scientists predict this entire “new ocean,” as a top Coast Guard official recently called it, will be ice free by mid-century.

In particular, renewed interest in natural-resource exploration in the Chukchi Sea makes this issue timely. It also heightens the need for a comprehensive approach to the Coast Guard’s ability to respond rapidly and effectively to oil spills and other maritime events.

To help address this known challenge, a team of researchers at CCICADA partner Rensselaer Polytechnic Institute in Troy, NY, launched the Dynamic Modeling for Arctic Resource Allocation (DMARA) project in 2013. (Following two visits to USCG District 17 offices in Juneau, Alaska, CCICADA reached an agreement with D17 to initiate the project and to formulate computer models to analyze and support Coast Guard decisions about operations and resources in the Arctic. DMARA is an important tool for implementing the USCG’s May 2013 Arctic Strategy.) 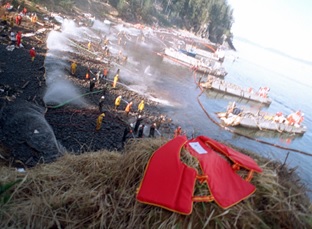 A dramatic photo of cleanup operations following the massive oil spill caused by the 1989 grounding of the “Exxon Valdez” tanker in the Gulf of Alaska.

The project is funded by CCICADA with support from US Coast Guard District 17, the Coast Guard Research and Development Center, and oil spill response organization Alaska Clean Seas.

The researchers recently reported results from the first phase of the project, which focuses on oil-spill response. (The second phase will focus on USCG communications technology and the USCG supply chain.)

The OSR model pairs a resource-allocation component with an effectiveness component, which work in concert to allocate resources dynamically across a geographic area, within a given time frame and budget, and then gauge the effectiveness of these allocation decisions by analyzing response capability for a set of potential oil-spill incidents.

The research team tested the scope and complexity of the OSR model by applying it to a case study developed from the new data set and the Alaska Clean Seas technical manual, which describes the tactics required to respond to a variety of oil spill incidents and lists the amounts, locations, types, and transit times of response equipment.

With 272 resource types, 11 task categories, and more than 17 locations, the case study resulted in around 10 million variables for just nine possible incidents. This complexity and scale of the problem surpasses the analytical and computational capabilities of commercial logistics software solutions, the research team reported.

In Phase II of the project, the researchers will vet their initial OSR model and data set with industry representatives and the Coast Guard. The Rensselaer team will pursue algorithmic research to increase the scale of the problems the model can solve. They also plan to incorporate graphic displays into the model to facilitate further its development and assess and interpret its results.

“The overall goal of the DMARA OSR project is to provide models and algorithms at a scale that will be useful in long-term resource allocation planning,” Wallace said. “Our Phase I results are an important milestone along the path to that goal. We are ramping up for Phase II and excited to continue moving this work forward.”

Wallace said the research team also will evaluate if the OSR model can be applied to assess resource allocation and logistics problems for other key Coast Guard missions involving dynamic uncertainties, such as search and rescue, navigational safety and traffic-management missions.

Led by Rutgers University, CCICADA’s work is carried out by researchers and students at the center’s 17 partner institutions, including Rensselaer. The center uses advanced data analysis and systems to address natural and manmade threats to the safety and security of the American people.